Searching For An Inmate in Jefferson County Jail, Here’s How!

Here’s for the example: 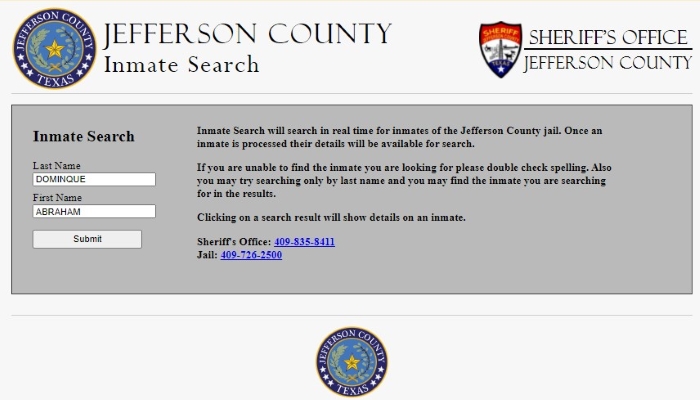 If you input those names and click on a search result, it will show you the details on an inmate you are searching for, here’s for the result:

That’s it! You successfully find an inmate’s information with the help of the Jefferson County Jail’s Inmate Search option.

After you are at the homepage, you should find the ‘Inmate’ drop-down menu. Then, click on this drop-down menu, find the ‘Inmate Roster’ option, and then click on it. By clicking this option, it will bring a list of recent inmates housed in Jefferson County Jail. The list of recent inmates comes in the PDF format. You can also print the list by only clicking on the ‘Printer’ icon.

Well, you will see all inmates that are housed in Jefferson County Jail. Certainly, you can also do a search for your inmate through this inmate list.

It’s important to note, if you face trouble in finding the inmate housed in Jefferson County Jail, make sure to double check spelling.

When to Visit a Jefferson County’s Inmate?

To visit an inmate housed in Jefferson County Jail, you should make an appointment and schedule your visit first. Keep in mind that all inmates will be allowed to accept your visit around 30 minutes per week.

How to Send Money to an Inmate?

To send money to inmates housed in Jefferson County Jail, you can do this through ConnectNetwork that offers some authorized service for electronic payments, additional enhanced inmate services and also account management.

After you have created the account, you will get access to the full range of services which GTL offers for facilities and for funding services for particular inmates. If you want to know more information about ConnectNetwork in detail, you can visit the official site at http://www.connectnetwork.com/.

Aside from ConnectNetwork, you can also use AdvancePay – Prepaid Telephone Accounts to accept calls from an inmate at this facility. In this case, prepaid calling will work by placing money on your phone number. Then, when your inmate calls you, the funds will be deducted from the balance on your prepaid account. To make an account of AdvancePay, you can see the tutorial here.

In the way of funding a commissary or trust account, there are a number of options, here are they:

The last way, you can also use Money Orders to send money to an inmate in Jefferson County Jail. You can mail money orders to 5030 Hwy 69 S. Beaumont, TX 77705.