If you have someone who is currently in a jail at Tarrant County, Texas, and you want to know about the bond information of that inmate, you are on the right page as you will be informed about such a thing. Keep going and do not stop.

According to the official website of Tarrant County, bonds may be posted at the Bond Desk of the Tarrant County Corrections Center. For those who have no idea where the Tarrant County Corrections Center is located, it is located at 100 N. Lamar, Fort Worth, TX 76196. This kind of thing is apparently posted at any time, 24 hours a day. If you want to know if a bond has been set, you are suggested to call the Tarrant County Jail Inmate Information Line at 817 884 3000. The same phone number can be dialed if you want to know the amount of the bond. You are suggested to make a call on the workday and or the working time so that you can get a better response. Talking about the bond, take note that those who want to pay the bond by yourself are needed to pay the full amount of the bond. 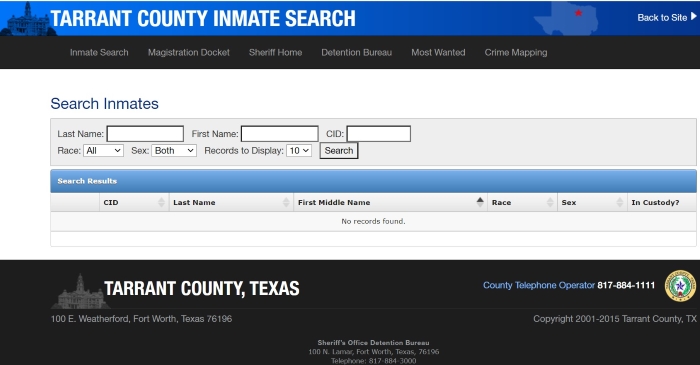 If you want to know about the charges and the fines of the inmate, you are recommended to click on the following link: https://inmatesearch.tarrantcounty.com/. Feel free to open the link on your computer browser or on your phone. By clicking on the link, you will be taken to the Search Inmates page where the white, blue, and black colors dominate the page. On this page, you will have to enter a few things such as the last name of the inmate, the first name of the inmate, and the CID of the inmate. After entering these three, you need to choose a race. The options of the race include Asian, Black, White, Indian, and all. Aside from the race, the next thing to choose is the sex. Feel free to choose male, female, or both. Then, choose the records to display (10, 20, or 50). Once you are done with everything, it is time for you to press the Search button to get the result shown on the screen. If you have any questions, feel free to ask the representative by calling the County Telephone Operator at 817 884 1111. You can also ask someone who knows better if you have a hard time but please be careful about the safety of the private information.

Bond is the term that is used to call an amount of money that can be in the form of anything, including cash, property, or surety bond. The purpose of it is to make sure that a person attends all required court appearances. A bond is the one that allows an arrested one, who is also known as a defendant, to be released from jail until their case is completed.

There are a few kinds of bonds. The first one is a cash bond. This one has to be posted using the total amount of cash. Everyone is able to post this variation of bond. When the case is over, it is possible for the cash bond to be refunded as long as there are no fees, fines, and or restitution owed. For instance, Ten Haag orders a $500 cash bond, needing someone to pay the full $500 to the court to be able to post bail for another party.

The second one is called surety bond. This one is 10% of the total bond ordered in a case and it has to be posted with a licensed bail agent. Then, the bail is posted by the bondsman with the court on his behalf. Unfortunately, there is no way for this kind of bond to be refunded. Here is the example of the surety bond: Ten Haag orders a $1,000 surety bond. Someone would give 10%, which is $10, to a licensed bondsman. In the end, the bondsman will post bail with the court on your behalf.

The third one is the XC split bond. This one is a mix of cash and surety bond. It is able to be refunded once the case is over as long as there are no fees, fines, and or restitution owed. For instance, Ten Haag orders an XC bond, consisting of $500 cash bond and $1,000 surety bond. Someone is able to post the $500 cash bond, which should be paid in full. It is a must for a licensed bond agent to post 10% of the surety bond, which is $100.

The fourth one is a percent bond. This one refers to a percent bond that needs someone to pay 10% of the total bond amount. The person who can do it can be anyone. A percent bond, which is also known as a PR bond, is able to be refunded as long as there are no fees, fines, and or restitution ordered once the case is over. It is possible for the bond depositor to need to pay the remaining 80% of the bond in case the defendant fails to show up. For instance, Ten Haag orders a $1,000 percent bond. A bondsman or anyone is able to post 10% of the bond amount, which is $100.

The fifth one is the XR split bond. This one is a mix of a surety bond and a percent bond. Apparently, the only thing that is able to be refunded is only the percent bond portion of an XR bond. Keep in mind that it is possible as long as there are no fines, fees, and or restitution owed to any party once the case is over. For instance, Ten Haag orders an XR bond and $1,000 is a surety bond while $500 is a percent bond. 10% of the surety bond amount must be posted by the bondsman, which is $100. Apart from that, anybody (it is not limited to a bondsman), has to post 10% of the percent bond, which is $50.