If you are looking for an inmate in the Florida Department of Corrections (FL DOC), the first thing that you have to do is to access the website at http://www.dc.state.fl.us/offendersearch/. On that page, you can read that it is an offender information search where below it, there is a form that you have to fill. You can fill one or more fields of the form. The fields include Last Name, First Name and DC Number. So, on these fields, you can fill in the last name of an inmate only or first name only or DC number only. However, if you know the inmate information about these three fields, then you can enter it. 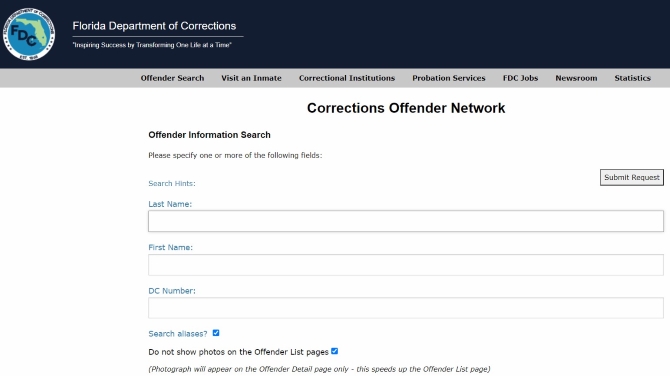 Under the form, there is “Search Aliases?” , “Do not show photos on the Offender List pages” and “Show only offenders that have photos”. You are able to give a check mark on the box besides these options or not depending on what you want.

Let’s take an example. Let’s say that you are looking for an inmate whose last name is George. So, you can enter ‘George’ in the Last Name field and then hit the Submit Request button. Then, there will be some options including:

If you want to search another inmate, just click on the New Search button on that inmate page. Then, you will be taken again to the previous page namely Corrections Offender Network (Inmate Population Information Search) page.

Actually, there are also the other options namely Search All Corrections Offender Databases and Inmate Escape Information Search. Search All Corrections Offender Databases will show a comprehensive search of all databases including inmate escapes, absconder/ fugitive, inmate population, inmate release and supervised population. However, because there are differences between database information, it only provides search options for criteria common to all databases. Let’s take an example. The search criteria “Warrant as of Date ” applies only to the Absconder/ Fugitive Information Search and there are no other databases. So, it is not able to be included as a criteria for searching all databases.

In the Inmate Escape Information Search, you will be given the information about inmates who have escaped from the custody of the Florida Department of Corrections and have an outstanding arrest warrant.